Is there a conspiracy against Cristiano Ronaldo? 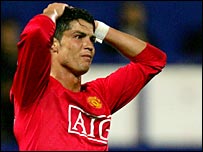 “I have come to understand that every movement I make, on or off the pitch, is analysed to death.â€ This is the thought of one of Englandâ€™s bad boy, Cristiano Ronaldo.

Weâ€™ve seen the reigning European Player of the Year lose his temper at times this season. Ronaldo was hugely criticised for grabbing Silvaâ€™s neck during Portugalâ€™s friendly match away to Brazil. The number 7 ace was also spotted kicking at Celticâ€™s Scott Brown back in October but managed to get away unpunished by the referee.

This time though, it could be a different story.

In Saturdayâ€™s EPL late game, the winger apparently kicked Tottenhamâ€™s Dawson after both battled for the ball on the touchline. The incident at that moment seemed nothing more than inconsequential, especially as Ronaldo quickly apologized to Dawson; the two then quickly looked as if they had cleared out any bad mood and the match continued just as it was. But a strange decision from the English FA explains that Cristiano Ronaldo could face a ban if found guilty after investigations.

In the same match, the Portuguese had a goal wrongly disallowed for handball.

Well, itâ€™s as if thereâ€™s a conspiracy against Cristiano Ronaldo to hinder the successful path he has been enjoying since 2007 especially.

The Portuguese already had to miss the start of the season following the ankle operation he had to undergo after being the victim of several fouls last year.
He then sustained a red card against Manchester City in strange circumstances last month. Now heâ€™s on the brink of facing another ban. And if referees keep having wrong judgements against him or Manchester United, Ronaldoâ€™s dream of defending his Golden Boots awards may fade away.

Scooping a multitude of individual and collective honours is the achievement of a hero. Will Ronaldo be strong enough to come out victorious from this seasonâ€™s tribulations to remain Footballâ€™s best player?