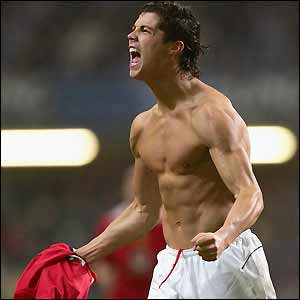 A 59 minute strike made the red crowd go bananas as Man U were then leading Wigan 3-0 at that stage. Most of all, Ronaldo had responded to the publicâ€™s critics by scoring in the final.
The so-called dancing clown therefore proved that he was a talented chap capable of scoring on big occasions.

Since then, Cristiano Ronaldo has developed into a matured Superstar winger and a prolific goal scorer. The Fifa Player of the year is currently on an impressive form and after working so hard against Inter, he might just get the right touch at Wembley on Sunday.

One thing we hope he doesn’t get of course is a booking – like in the 2006 final when he removed his shirt.