Just when I thought they were about to keep it low for a while, Cristiano and Irina were seen again together in Madrid by paparazzi, also involves kissing scene.

Their pictures at Hercules match recently made the speculation about their marriage next year sounds possible. Judging by these pictures, the couple didn’t seems to get annoyed with their pictures taken by the papz.

During her visit to Madrid, for her job as the face of  Spanish clothing line, Cris accompanied her everywhere she goes. But although they looked happy, there are no sign of Cris family. Could it be because of their lack of conversation, (since Dolly can’t speak English or Russia, while Iri doesn’t understand a word in Portuguese) that makes them rarely to be seen together ??

Anyway here are the pictures : 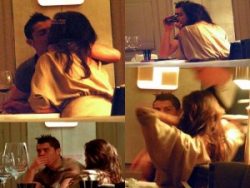