Theo Walcott: I want to be like Cristiano Ronaldo 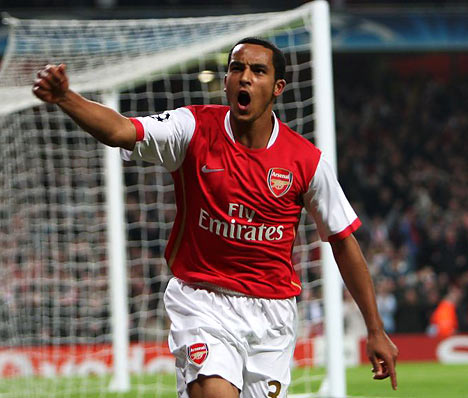 The day has finally come for Manchester United to come up against Arsenal in an all-English Champions League semifinal clash at Old Trafford.
The European defending champions renew their rivalry against Arsene Wengerâ€™s Gunners in a battle that promises to be different from all the other matches played between these two teams.

It will be a duel between Manchester Unitedâ€™s duo Wayne Rooney and Cristiano Ronaldo and Arsenalâ€™s young skipper Cesc Fabregas and Theo Walcott.

The quick footed English winger â€“ who dreams about outclassing the Red Devils for a place in the final â€“ has all the same, sang praises to Manchester Unitedâ€™s Portuguese Superstar Cristiano Ronaldo whom he wants to emulate.

“He is the best player in the world for me,” Walcott told The Sun speaking about Cristiano Ronaldo.
“He only needs to walk onto the pitch to have defenders scared straight away. That’s the message I want to send out.

“I want left-backs to see my name on the team-sheet and be afraid of me even before we’ve kicked off. I’ve got to work hard to get to that level. Ronaldo and Wayne Rooney are already there.â€

Theo Walcott is yet to reach the standards of Cristiano Ronaldo who has won everything in club football. However the admiration that he has towards the Worldâ€™s best player doesnâ€™t explain that Walcottâ€™s desire to trample Manchester United has faltered somehow.

“We have learned a huge lesson from the way we went out of last season’s competition at Liverpool,” Walcott declared.

“We thought we’d won it right at the death and we were still buzzing from our goal instead of concentrating on our job when they scored again,” he explained before concluding:

“We won’t make that mistake again.”

It will be a crunching battle between the man that broke Portoâ€™s record with a thunderbolt strike and Theo Walcott who also scored in Arsenalâ€™s 3-0 thrashing of Villareal to progress into the semis.

Watch videos of Cristiano Ronaldo and of Theo Walcott here and compare their skills for yourself: