Kim Kardashian and Paris Hilton are old news. Now it’s Irina Shayk, the swimsuit model from Sports Illustrated. The news about Cristiano boating on Corsica Island on his last holiday before flew back to Portugal for WC preparation turns out to be true. As we could see the pictures of the two love-bird splashing around near the boat.

Irina Shayk is a model from Russia, who won a local beauty pageant called “Miss Chelyabinsko”. A talent scout then recommended her to pursue a carreer as a model – till now. There is no news on how the two could met. But since they both posing for Armani underwear ads for 2010 season, there’s a slight chance of them to meet during the promotion or campaign. Who knows ?

The handsome Real Madrid striker reportedly has been seeing Irina for quite sometimes now. Is this mean she’s Cristiano Ronaldo girlfriend now ? Too soon to tell, meanwhile, enjoy viewing the pictures of them in a romantic vacation. 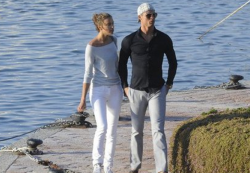