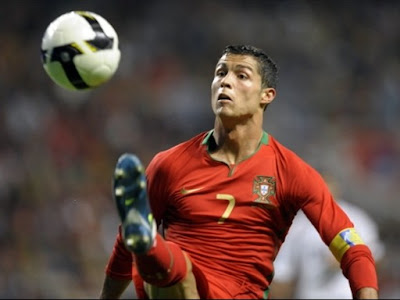 Manchester Unitedâ€™s Star winger Cristiano Ronaldo will captain his country Portugal later tonight in a friendly against Finland at the Estadio Algarve.
The match is set to prepare the Seleccao for their next crucial World Cup qualifier against Sweden at home.

Both sides go into the game wounded after suffering trouncing defeats in their respective previous international friendly. While Finland would love to back up from a heavy 5-1 loss to Japan and three defeats on the trot, Cristiano Ronaldoâ€™s Portugal would prefer to forget the humiliating 6-2 defeat they experienced in the hands of Brazil at the end of last year.

The maroons have managed only one victory out of their four qualifying games, which puts them in a very difficult position should they want to reach South Africa 2010.

The appointment of new coach Carlos Queiroz came as good news to most Portuguese fans, but the teamâ€™s poor results have now raised doubts over the ability of the manager.

However, Queiroz is not the only one to face criticism from football analysts and Portuguese supporters. Ballon dâ€™Or award winning player Cristiano Ronaldo â€“ now Portugalâ€™s number one captain â€“ is yet to influence his team to a consistent and convincing formâ€¦ even qualification to the World Cup remains absolutely uncertain.

Tonightâ€™s game against Finland will be Portugalâ€™s last rehearsal before they resume qualification â€“ where every match has become a do or die affair â€“ and skipper Cristiano Ronaldo must fulfill his task to assure fans that Portugal possess a potential captain that will lead them to the finals in 2010.