Are the good days of Manchester United and Cristiano Ronaldo already over? 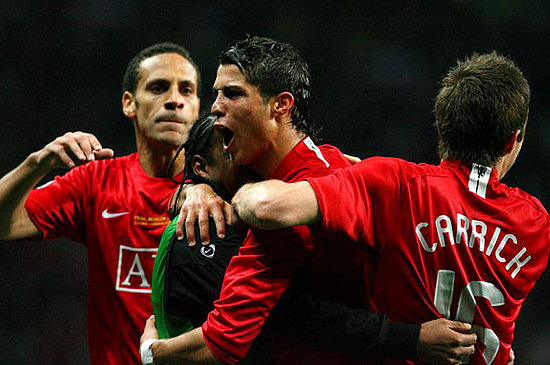 The worst that could happen to the Red Devils after securing the Carling Cup and an UEFA quarterfinal place this month is indeed happening in the most frustrating manner.
With seven goals conceded in their last three Premiership games and two losses against Liverpool and Londonâ€™s Fulham, the World Champions look more beatable than ever this season.

Cristiano Ronaldo, who seemed to have given his all last week against the Merseyside Reds, was the home fansâ€™ clown on Saturday afternoon at Craven Cottage.

Click on “Read More” to watch highlights of Manchester United’s 2-0 loss to Fulham.

Manchester United were out to correct themselves after a humiliating 4-1 defeat at the Theatre of Dreams against Liverpool, this time with a trip to Fulham whom they previously trounced 3-0 and 4-0 in the EPL and the FA Cup respectively.

However, despite Ferdinand declaring his excitement and readiness ahead of the Fulham game, Manchester Unitedâ€™s psychological strength was still questionable.
Alex Ferguson had revealed earlier in the week that winning the quintuple was a dream he had given up, while Liverpoolâ€™s boss Rafael Benitez was all smiles putting pen to paper for a new 5-year-contract with his current club.

Only eighteen minutes had run down the clock and Manchester Unitedâ€™s veteran player Paul Scholes was already sent off after handling the ball on the goal line. Danny Murphy had the opportunity to score past Van der Sar for the sixth time in just over 200 minutes and he didnâ€™t miss it.

From there, the Red Devilsâ€™ task was to overcome Fulhamâ€™s formidable performance and the numerical disadvantage. But it went without saying that United â€“ who didnâ€™t create much trouble for the hosts â€“ felt the frustration. One man amongst the Redsâ€™ ten men on the pitch who couldnâ€™t hide his anguish the least was Cristiano Ronaldo.

His accentuated body language was the home fansâ€™ entertainment added to Fulhamâ€™s ability to keep hold of their lead.
Ronaldo finally sustained a yellow card in the second half; he could easily have seen red if the referee had decided to punish him from protesting the judgment. Filled with anger and frustration throughout the rest of the game, Cristiano Ronaldo tried to get Manchester United back into the game with fierce attacks. But Fulhamâ€™s keeper Schwartzer always looked alert enough to save every single ball.

If the second-half introduction of Wayne Rooney gave Manchester United the attacking sense they lacked off, it also spiced up the game with some controversy.
Fulham rounded up the game on 87 minutes when substitute Zoltan Gera fired the ball past the 38th-years-old Dutch keeper from Andy Johnson’s cross, much to the frustration of Wayne Rooney who wanted to waste no more time. This resulted in him being sent off for aggressively protesting at the referee for an United free-kick to be taking quickly.
But Fulham fans wouldnâ€™t mind whatever had to be the perfect decision there. Their team had beating United for the first time in 45 years on a very bad day for the Red Devils.

Manchester United failed to reaffirm their authority, loosing back to back for the first time in over three years. The title race is still wide open to Liverpool especially who later trounced Aston Villa 5-0, while Chelsea lost to Tottenham on Saturday afternoon.

Have Manchester United and Cristiano Ronaldo lost the plot to Rafaâ€™s Red army?